There are three things that define elite Texas Hold’em Poker players: the raw skill, a strong sense of discipline, and a fundamental understanding of the “Poker Math”. Out of the three, the poker math is the one thing you can work on today in order to make yourself a better poker player tomorrow. In fact, understanding poker math is necessary if you want to learn how to play game theory optimal poker, a necessary tool in any elite player’s arsenal nowadays.

So, Where Does Poker Math Figure In Texas Hold’em?

Well, everywhere is the answer. When you are trying to calculate the odds of hitting a draw, you are calculating the number of outs you have and using that to calculate the probability of making a winning poker hand. When an opponent raises you, you need to calculate whether their raise is worth calling using what is known as pot odds. Pre-flop, you need to know how strong your hand is and where it falls within your range of hands. In short, you cannot understand poker strategy without understanding poker math.

But, not only does the poker math help you navigate the sometimes turbulent waves of the felt, but it also allows you to remain objective throughout. You see, too many players focus on their results instead of their decisions, which means when they win, they ascribe their success to playing well, and vice versa when they lose.

However, what these players are probably overlooking is that their immediate results might have been influenced by luck, one way or another. In other words, a winning poker player might be playing horribly during a session, yet because lady luck sees it fit to smile upon him, the player is running hot and winning every hand they’re in.

Good poker players don’t look at their immediate results; instead, they look at their results over several sessions and thousands of hands, at which point the effect of luck becomes less prominent and a player’s skill is what makes all the difference. During all of this, poker math is a powerful tool that can help you judge the viability of each individual decision, helping you keep your eyes focused on the long-term.

Bearing that in mind, you will find that math is used in two main ways in poker. For starters, there is the calculation of the probability of a certain event happening. Secondly, this probability is used to calculate the E.V., expected value, of a particular hand, which lets you know whether it is mathematically profitable for you to keep on playing. 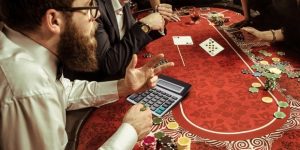 What is probability? Probability is the branch of mathematics that concerns itself with finding out the likelihood of a certain event occurring given a set of different possible events. This might seem vague, but you will understand it better once you look at a few examples:

What’s more, when you hear that the probability of an outcome happening is around 50 percent, what this means is that if the event, such as tossing a coin, were to happen ten times in a row, then, theoretically speaking, the outcome in question, such as showing up heads, should happen around five times. Obviously, real-life results will vary, and it is rarely the case that a coin that is tossed ten times will show exactly five heads.

As you increase the number of tosses, the number of heads you get starts to converge towards the theoretical probability. In other words, if you toss the coin a hundred times, the number of heads you’ll get will be closer to half of all throws as opposed to when you threw the coin only ten times. Similarly, when you throw a coin a thousand times, you’ll get closer still. This is known as the theory of large numbers and is why poker players shouldn’t judge themselves based on how they have fared during a particular hand but should judge their play over several sessions or over multiple poker tournaments. 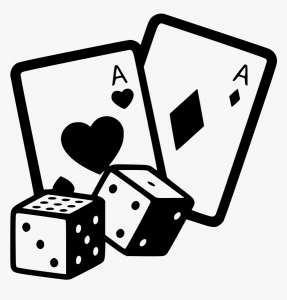 Unlike coins or dice, when you draw a specific card from a deck, this affects the probabilities of subsequent draws. Let’s say you drew the king of clubs the first time around. Now, there are 51 remaining cards in the deck, and there are only three kings left. So, the odds of drawing another king are 3/51, 5.88 percent.

Poker Math: The Probabilities of Getting Certain Hands

Well, for one thing, you can use the above information to calculate the probability of getting a specific hand pre-flop. When you draw two random cards, you are faced with 1326 possible starting hands, which is the total number of outcomes. Within these 1326 hands, there are 78 combinations of cards that’ll give you a pocket pair. Ergo, the probability of having a pocket pair is 78/1326, which comes down to 1/17, 5.88 percent.

However, if you’re gunning for a particular pocket pair, say aces, then you can only make that particular pocket pair in six ways. So, the probability of getting aces is 6/1326, 0.45 percent, which means that you can expect to get aces once out of every two hundred hands. The likelihood of getting a suited hand is 312/1326, 23.5 percent, whereas the probability of getting a specific suited, such as ace-king suited, is 4/1326, 0.3 percent.

Before you see the flop, you should always know the probability of winning given both your hand and your opponent’s hand. For example in a heads-up situation, i.e. one where you are up against a single opponent, if you have two low cards, such as a four and a six, whereas your opponent has a high pair, such as two queens, then your probability of winning this hand is around 17 percent.

Even if you have a low pair, two fours, and are up against a high pair, the two queens from earlier, your chances hardly improve: You have around an 18 percent chance of winning the hand. But, if your opponent has two high cards, a king and queen for example, while you have two low cards, such as a four and a six, you have a 37 percent chance to win the hand.

Should you find yourself with a high card and a low card, something such as an ace and a three, while your opponent has a medium pair, like two eights, then you have a 29 percent probability of winning the hand. Finally, should you have a low pair, like two fours, and are going up against an opponent that has two high cards, such as a queen and a jack, then you should win 45 percent of the time, which is almost a coin flip.

Any poker player worth their salt should have these numbers memorized as they form mathematical poker rules that govern the felt.

Generally speaking, in an unpaired hand, at least one card will pair up 32 percent of the time, which is around a third of the hands you’ll play. Additionally, if you have two suited cards in your hand, you should expect to have a flush around 6.5 percent of the time.

What About the Flop?

As you can see, the beauty of poker math is that it gives you a clear view of what each hand is worth, preventing you from over-valuing certain hands such as suited connectors, think of the seven and eight of spades, which will make a flush less than once every 15 hands.

That being said, suppose you flop a four flush, and you want to know how likely it is that you’ll improve on the turn or the river, then you can use Phil Gordon’s “rule of four and two” from his Little Green Book. Simply put, you first have to count the number of outs that’ll make your hand: So, if you flop a four flush, there are nine remaining cards that’ll give you a full flush. Afterward, you multiply the number of remaining outs by four if you’re waiting for the turn and river and by two if you’re only waiting for the river.

This rule will become clearer if you look at an example:

A recurring scenario that you will experience countless times will play as follows: You’ll go up against an opponent, and you’ll have the better hand. In fact, your opponent will have a very slim chance of winning the hand, say 5 percent. Nevertheless, they’ll river one of their two outs to steal the pot right from under you. This is known as a bad beat, and you need to learn how to deal with it when it happens to you. After all, a hand with a 5 percent chance of winning will get there once out of every 20 times, and if you play enough poker games, you will experience your share of bad beats.

Bad beats are a part of poker, and it is largely why beginner players tend to stick around. They attribute their success at the table to their skill instead of blind luck, a mistake you must always be wary of.

The other use of mathematics in poker is the calculation of pot odds, which are integral for sizing bets and figuring out whether you’re getting the right price to call a bet.

In a nutshell, you calculate the pot odds by comparing the size of your bet with the size of the pot you stand to win. For example, if the pot is $80 and your opponent bets $10, forcing you to bet $10 as well, you are getting 9-to-1 odds to call because you stand to win $90, the pot’s $80 plus your opponent’s $10, while contributing only $10. Therefore, after a single round of betting, the pot’s size will have reached $100 and you will have contributed 10 percent of it.

So, Why Do The Pot Odds Matter?

For instance, let’s suppose you’re on a flush draw with nine outs and the turn and the river have yet to come. That means you have a 36 percent chance of making the hand. So, if your opponent makes a pot-sized bet, you will be looking at 2-1 odds, which means that you’ll be contributing about 33 percent of the pot. In this scenario, you are getting about fair odds and might want to consider calling the bet.

However, in the same scenario above, if your opponent tries to price you out and bets twice the size of the pot, you will be looking at 3-2 odd, which means that you’ll be contributing about 40 percent of the pot. In this scenario, the price might be too expensive and you might want to consider folding.

It should be clear by now that poker math factors heavily into every decision you make at the poker table, be it to see a draw or to raise pre-flop. Moreover, once you start delving into poker theory even more, you will start realizing that math is a big part of figuring out how to play specific ranges as well as how to play short stacked and deep stacked: Concepts such as shove charts and opening hands are integral tools that every poker player has to know. Furthermore, when you rely on the poker math, you will be able to judge your decisions more objectively, disregarding the results of those decisions.

Do you have to be good at math to play poker?

Poker math isn’t as complicated as you might think. As long as you can learn the basics, you’re good to go.

How are poker odds calculated?

You want the real answer? They’re not. They’re memorized. If it’s a value bet situation, it’s second nature by looking at the pot with the naked eye.

What percentage of poker is luck?

How do you learn percentages in poker?

Just get a chart and you memorize them. For example, if you need one more card for a flush on the flop, you’re roughly 36% to hit it on the turn or river.