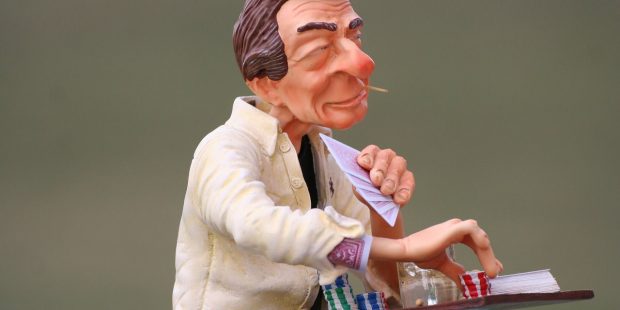 Then again, now that I think about it (as I’m writing this), most human beings ask questions like this for themselves, in case they decide to go that route. Many times, it’s a fantasy, but they want to know so they can apply the information to that fantasy. They don’t realize it’s a fantasy, though (yes, human beings are complicated). They’re not going to leave their traditional job and suddenly become a non-conformist.

First have set up a DBA Professional Poker Player Determination Committee and rent out a P.O. Box for one month (with the address I provided). Shit, I could do this over and over again and fleece the hell out of unsuspecting victims. MP would be excited about this!

There is only one problem with that scenario. I’m not like that. I guess this is a good time for you to get to know and understand me a little since you read my articles.

It’s a strange dichotomy that there are some people like this in the poker industry and I’m nowhere near that. I will always be honest and transparent. I learned much earlier in life that lying will mess you up! You end up needing to tell another lie to cover the original lie and so on. It’s a big headache.

In my defense, I was alone a lot of the time and I lied to protect myself. I pretty much never lie now, unless it’s an absolute emergency, like if a woman asks me if she looks fat.

What’s really strange is that despite being honest and transparent, I truly believe that there isn’t one poker player out there that has a more deceptive mind at the poker table. This doesn’t mean I’m a great poker player. It means I’m the most deceptive. How do you think I have so many cashes and final tables when I’m only average at math? I make up for my lack of advanced math skills with other skills, which relates to survival mode earlier in life.

This has turned more into a short story than a poker article, hasn’t it? Shit, it’s almost a freaking autobiography. You know how it is. I go where my mind takes me. It must be a non-conformist thing.

Fortunately, something in my brain tells me to me to get back on track, like right now. My brain just told me that I should begin writing about how to become a professional poker player, poker strategy, our poker rules for winning, and stuff like that. Therefore, that’s what I shall do!

How to Become a Professional Poker Player: Your First Steps

Once you have made this decision, there are several things you will need to do, but not in the way you’re thinking. The first thing you need to do is decide if you want to be a live, online, or live/online player. This is for clarity purposes. After that, you need to determine what stakes you will play.

Once you decide the stakes you will play, you need to create a notebook on your phone (or use a poker journal) to keep track of every session. DO NOT undervalue this! It plays a tremendous role in our poker rules for winning.

When I say keep track of every session, I’m referring to traditional poker games, Texas Hold’em poker tournaments, and all other kinds of poker tournaments. Make sure you separate these into different categories.

Of course, you want to keep going to back to that poker room at the times when you make the most money. You also want to avoid playing at times when you continue to lose money.

A part of you might want to keep going back on Wednesday night to prove something, but if you have that mentality, you’re losing to Ego. The test isn’t to beat your peers in a Wednesday night poker game. They don’t care. They’re human beings playing poker. They only care about their own results, I promise.

It’s really Ego that’s testing you, and if you go to that Wednesday night poker game, where it’s all regs and professional poker players, Ego has defeated you.

Would you rather continue to lose at a Wednesday night poker game to prove a point OR eliminate that leak, defeat Ego, and play more sessions when you’re profitable so you can afford that vacation to the Caribbean?

Let’s get to hand selection.

If you play poker, then you have seen that dude that plays every hand, racks in a ton of chips, and laughs while saying, “You gotta be in it to win it!”

If you hang around 1-3 more hours, every single one of those chips will be gone. It happens all the time. I can give you the simple version on this. Anyone who thinks they have to be in it to win it doesn’t understand how to become a professional poker player. The truth about how to become a professional poker player when it comes to poker hands will probably surprise you.

You want to play fewer poker hands. That’s one of the simplest yet most effective poker tips you will ever read. In your life! If you listen to this tip and apply it, you will likely be successful. You will at least have a much better chance at success.

There are ways to play fewer poker hands. The most obvious is SPATS, which I write about in The Perfect Range. You can read it on paperback and Kindle (or any digital device), or you can listen to it on audio. If you’re an Amazon Prime member, you can read it for free. I don’t plug my books on these articles very often because I don’t want my articles to come off as salesy. They’re not salesy. However, in this case, I have no doubt that SPATS will help you.

I have no doubt of that because I have literally had dozens of people contact me to tell me it changed their games (and sometimes lives). These had been the kinds of people to ask how to become a professional poker player. Now they’re crushing it.

As is usually the case, my poker tips and poker strategy are a little different. My Goal: Find the path to profitability. As advised in my book (and other books), these people aren’t playing high stakes. Instead, they’re applying a poker strategy that is highly effective in lower stakes games, thereby allowing them to have a high win rate so they can methodically build a bankroll.

The reputation of winning in these games leads to their opponents folding to them more often, which creates a virtuous cycle. When the bankroll is built bigger, these players will then sometimes use a portion of that bankroll for bigger buy-in poker tournaments.

Believe it or not, if you’re wondering about how to become a professional poker player and all this piques your interest, I DO NOT recommend playing in bigger buy-in poker tournaments. I learned my lesson the hard way with this.

After a run of relatively big scores in bigger buy-in poker tournaments, I got wrapped up in chasing points on the WSOP Circuit. This led to me firing at tournaments left and right without really slowing down, focusing, and appreciating each tournament. In one tournament, I remember making a loose call in min-cash territory because I had just said to myself, “If I lose this hand, I’ll just final table the next one.”

Horrible attitude! Think of Dan Marino. He went to the Super Bowl in his first season and assumed he would be back many times.

Lost that Super Bowl and never returned. He is now retired and tells young QBs who get to the Super Bowl, “Appreciate it. Savor every moment. It might be your only shot.”

If my SPATS poker strategy helps a player win consistently at lower levels, they should almost never play higher levels. Once in a while for fun and a dream is understandable, but it should never become a trend. There is a HUGE factor here, and it relates to how to become a professional poker player.

Don’t think there is another professional poker player out there who consistently plays both types of poker tournaments. I will literally play a $135 Nightly on a Thursday and a $1,700 Main Event the next day. I can tell you from experience that the fields are incredibly different. Would you rather cash 30% of the time in a Nightly or 5% of the time in the Main? It depends how big the cash is in the Main, but let’s exclude the final table in that scenario.

My point is that you should continue to dominate the softer fields! I’m living proof of this. Sure, I’ll have some big scores in the bigger events, but when you play those higher buy-ins, the skill level is too similar to other players and your advantage narrows. When you play those smaller events, you have a tremendous advantage. You’re not going to win every time, but if you read the poker tips in my articles and apply them, you should definitely make money.

So … did you pick up on something? This section was supposed to be about poker hands, but it ended up being about game selection. This should tell you the importance of game selection. If you want to know how to become a professional poker player, then it’s imperative to remember that game selection is paramount in your success.

I could cover several bases here, but the most important point of this article is that you need to focus on dominating weaker competition. Don’t be like so many other players who continue chasing the big score in the bigger buy-in poker tournaments because they want everyone to love them. You can’t buy love.

If you want people to love you, be you. This will attract the people who truly do love you, and it will weed out the rest. It’s about who you connect with. Separate that and poker. On the poker side, care not who loves you! Just dominate lesser skilled players in lower buy-in games.

Q: How do you start a professional poker career?

A: It’s more mindset than anything else. However, I would recommend building a bankroll and sticking to low-stakes games.

Q: Can I make a living playing poker?

A: Yes. Your best bet at success is to learn how to dominate low-stakes cash games and low buy-in poker tournaments. This approach widens the skill gap and gives you a much bigger advantage.

Q: How much does a professional poker player make?

A: It depends on the poker player. Some make millions, some make less than the average annual salary, and some lose money. Game selection and bankroll management play major roles.

Q: How many hours a day does a professional poker player play?